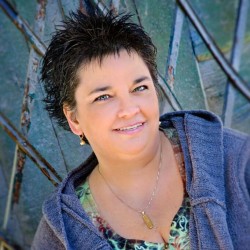 Conversation Skills is a course that enhances effective communication skills to include the ability to stay in dialogue when emotions are driving us to “shout out” or “shut down.” This course provides knowledge and tools for listening, creating connection and facilitating dialogue in tough, emotional situations. The principles and models taught are aligned with spiritual practices. The class is based on the model of Nonviolent Communication (NVC), which includes: taking responsibility for our own experience; commitment to increasing our awareness of our own feelings and needs as well as those of the people with whom we interact; and having the capacity to be authentic and compassionate in all circumstances.

Upon completion of this course, learners will be able to:

Growing up in a typical Australian home, where Easter and Christmas were a thing, albeit no related spiritual life was discussed, ever, she chose to look into spiritual consciousness and alternative therapies. Connecting in early 1990 to Alpha Dynamics, then reading Unity authors from then, by 2003 Diane had joined Unity of Melbourne community. “Education as the centre of all things” This is, self-education, curiosity in all the fields of life. Diane feels academic study has its bene-fits, but it is when we step out into self-development that we really advance. Expanding our thinking, questioning ‘the norm’, finding our own way, looking at all perspectives, we can empower ourselves and others. Very passionate about human wellness, health in all its areas: physical, emotional, mental, spiritual, and yep-financial. Serving our business owners and other communities to be inspired to work with their passion and create, feeds Diane’s inspiration. Diane currently lives in Melbourne, and loves traveling all around Australasia.

The 5 Principles: A Guide to Practical Spirituality by Rev. Ellen Debenport

Rev. Phyllis Grace enjoys sharing Unity teachings because they offer a powerful and exquisite model for living a happy, peaceful and abundant life. As she has witnessed in her own life, as well as the lives of others over the years.

She grew up in Adelaide, trained as a teacher, married at an early age and had 5 children. She divorced in 1976, and within 10 years found herself in another unhealthy relationship which took her to Sydney. Eventually she found herself returning to Adelaide.

She recalls, “As I drove back to Adelaide I felt a strong urge to move to Perth. Although I felt it would just be running away, the feelings would not let go. So 18 months later, on my own, I moved half way across the country, in the hopes of studying and practicing Educational Kinesiology. I fell in love with my new life.”

Even though that plan did not come to fruition, she was guided once again to something else, and in late 1991 found herself in Unity. On one of her first visits to Unity Centre of Perth, she asked the minister “What is Unity?” What Phyllis heard inspired her to wanting to learn more. She was given a copy of H. Emilie Cady’s book Lessons in Truth and contacted Unity in Brisbane to start studying.

After just over two years of travel between Perth and Brisbane and several correspondence courses Phyllis moved to Brisbane to complete Licensed Unity Teacher studies, then entered Unity’s seminary in the United States and was ordained in 1997. Since then Rev. Phyllis has ministered communities in Adelaide and Perth. After 9 years of church ministry, she became part of the teaching team for UNS. Since her ordination she has been actively involved as a member of AAUL (Australian Association of Unity Leaders) and UNS holding positions as Treasurer, President and Director of UNS.

Phyllis enjoys reading spiritual books, as well as fiction stories about Australia, gardening, walking and spending time with her family.

Rachel was always destined to travel down the spiritual path from a very young age, having a mother and grandmothers on both sides that could see the unseen. Today she refers to herself as “a military sergeant, corporate tech executive, spiritual coach and leadership trainer, and when I combine all these energies I radiate the essence of a Divine Warrior.”

She grew up living in caravan parks and all things gypsy until falling in love with all things military at 18. Rachel spent 10 years in the army, serving overseas in war torn environments. After leaving the military the next 20 years were devoted to the corporate world – all the while dabbling on the side in all things spiritual and alternative therapies.

During her corporate years she discovered Unity, fell in love with Catherine Ponder’s teachings and from there, started blending Unity principles into her corporate and business world.

Rachel is passionate and inspired by sharing and teaching all things spiritual, Biblical and metaphysical. The Unity teachings have changed her life in so many ways, and she now loves sharing all that she has learned with others interested and on the spiritual path. You can read more about Rachel at www.rachelwotten.com.

Rhonda’s passion is for teaching the Bible subjects, both history and interpretation. “I was not even interested in the Bible until I studied it in Unity during the 80s, sending me on a deep dive into the Bible and archaeology of ancient times.”

Rhonda received her Licensed Unity Teacher certificate in 1988, and her ordination in 1994.  Over the years, Rhonda’s roles in Unity have included teaching a variety of Unity classes, serving as Senior minister for Unity of Melbourne, and currently in her 14th year as Senior Minister for Unity Reflections of Truth in Brisbane.

She is dedicated to mentoring the next generation of Unity teachers to continue the wonderful work of sharing Unity principles with those ready to change their lives through spiritual awareness. She is grateful for Zoom, which is allowing those not near a Unity centre to participate in services and classes.

Since the mid 1980s she has been engaged in learning Unity teachings through the work of Edwene Gaines’ and Catherine Ponder. During the mid 1990s she was a member at Unity of Brisbane, Australia and worked at Silent Unity, the 130 year old prayer ministry of the global Unity movement.

Although a native born Kiwi, Ros spent almost 10 years in the United States (2004-2014) with her husband John, working in Maine. Upon her arrival in the U.S., she was blessed to find a thriving Unity community just minutes from her home! Ros was an active member of Unity of Greater Portland church and served on the board for a number of years. First as treasurer, and then as the president.

She became a Prayer Chaplain in 2005 after completing training with Rev. Lei Lanni Burt through Light and Love Ministries. In 2009 she took on the commitment of being the Prayer Chaplain Coordinator for the ministry upon completion of extended Prayer Chaplain training. Throughout her time in America, she also traveled to Unity Village, Missouri multiple times over the course of several years for Spiritual Education and Enrichment classes, and in 2011 became a Licensed Unity Teacher.

Ros’ commitment to sharing Unity teachings and helping others apply the transformational principles to their own lives continues today. Upon returning home in 2014, she attended the Australasian Unity Leaders Meeting on the Gold Coast and in 2015, agreed to take on the role of secretary for the organisation. When the Director of Unity National School for Australia and New Zealand voiced her intention to resign, Ros suddenly knew this was hers to do, and the next year she took on the role of Director for the school. She currently is continuing her ministry studies with Unity Worldwide Spiritual Institute.

Anne is an Ordained Unity Minister and Metaphysical Minister and is currently the Spiritual Leader at EmpowerLife Melbourne. In her earlier years, Anne worked extensively in the music industry, as a professional violinist, performing in Symphony Orchestras and recording in music studios. She later became the Director of a music production company, organising music events, festivals and supporting international artists.

Anne was drawn to Unity in the early 1990’s after reading several books by Charles Fillmore, co-founder of Unity. This inspired her to begin studies to become a Licensed Unity Teacher, and then later decided to continuing her education and sought credentialing as a Unity Minister through Unity of Hawaii.

An enthusiastic teacher of New Thought and Unity, Anne sees those principles and ideas as being just as relevant today as the day they were written. She believes that we all have the ability to tap into our creativity in order to build our best lives, so she has dedicated herself to supporting others in becoming empowered and to experience meaning and purpose in their own lives.

His family has also travelled extensively throughout Europe, America and South East Asia which has given Julian a broader world view perspective. In 1972 the family were living in Honolulu where Julian’s mother, Grace Merrick, found Unity and Julian attended the Youth of Unity. On returning to Australia Julian attended two high schools run by the Anglican Church providing him with a more traditional perspective of religious teachings.

During his adult years Julian was chasing the traditional goals of wealth and corporate acceptance which resulted in many job changes and even bankruptcy and a divorce which ultimately led Julian to look internally at what he was doing with his life and ask questions about what life was telling him.

In his early 30’s, Julian was introduced to the 12 steps through a program in the Laurentian Mountains outside Montreal Canada, that utilised the Unity 12 Powers as well the Unity concept of One Power which made him feel as though he was coming home. Reconnecting with his Unity roots provided him concepts and ideas on living from the inside out instead of looking for happiness through the material world. Julian then spent twelve months in the USA visiting various Unity churches before returning to Australia.

On returning to Australia, he joined the Unity family in Brisbane where he became a board member and completed the Spiritual Education and Enrichment program and then decided to further his education and become a Licensed Unity Teacher. In 2019, Julian completed that training and has been an active facilitator and leader for Unity National School since then. Staying true to form as the ever-evolving spiritual seeker, Julian began his studies to become a licensed and ordained Unity minister.

Having a lifetime interest in broadcasting, music spirituality and interfaith studies, he has been able to combine all of these interests over the years in his roles in ministry.

He was ordained as a Divine Science Minister in 2008 and is a Licensed Unity Minister. He became Associate Minister at Unity of Melbourne in 2008, and later became Senior Minister where he still serves.

Bill serves with Rev. Dr. Sylvia Eriksson as District Presidents of the International New Thought Alliance in Victoria. Committed to teaching and growing Unity leaders, he serves as a member of the Australian Association of Unity Leaders and is keen to see students making use of Zoom classes which are now offered by Unity National School here in Australia and NewZealand.